If you not change browser settings, you agree to it. Learn more

Gino Bogoni was born on 7th July 1921, the last of six children (Ferruccio, Angelina, Edvige, Alberto, Elvira and Rina, his half-sister from his father's second marriage), born to Luigi and Augusta Rachele Lonardi in Verona, Via Lombroso. He had an unhappy childhood due to the premature death of his mother and the presence of a stepmother, and a difficult adolescence. However, he had a precocious interest in and openness to art, such that when he met Franco Egidio Girelli, Director of the Accademia Cignaroli in Verona, in 1934, the latter convinced Bogoni's parents to let him attend classes.

At the age of 13, Bogoni was already both the master's favourite and his assistant. He assisted in works of greater and greater importance: "At the Academy, I went to very few lessons because I spent all my time in the workshop" (diary, p. 205 - 206). He continues: "I stood out in all fields, not to mention handicraft work, because I could always find a new approach. Two days a week I was entrusted with teaching in the casting room...".

These years of apprenticeship and hard work to satisfy the demands of his family culminated in two episodes: running away from home at the age of just 17 and winning the first prize at the Agonali dell'Arte in 1938. One of the last works for Girelli was a bass-relief measuring 220cm by 700cm for the Exhibition of Minerals in Rome, which he completed with Giuseppe Fontana. After receiving his diploma in Sculpture in 1939, he continued to attend the Accademia until June 1941, when he was called to arms. Soon after, he was attached to the 231st Motorised 3rd Rapid Division and sent to Russia where he had the numerous adventures copiously related in his diary and where he remained until spring 1943 when he returned to Italy on foot and alone.

On April 22, 1944, he married Lina whom he had met very briefly before leaving for the Russian Campaign. They had two sons, Giancarlo and Franco. After 8th September, Bogoni joined the partisans and went underground, remaining with them until the end of the war, moving in and around the outskirts of Verona.
The Russian Campaign and the hard months in the passive armed resistance movement reduced him to a shred, resulting in a nervous breakdo

wn whose effects stayed with him from the end of the war until 1951.

To make a living he taught and accepted various types of restoration work, and then in 1947 he was invited by the Veronese sculptor Nereo Costantini to make 29 negative casts of the panels on the bronze doors of San Zeno Basilica in Verona, work which extended over a period of six months.

He worked from 5am in the morning until 11pm at night, producing one negative a day. First he made them for a few friends and then later for a wider and more discriminating public. These negatives and those of the folk statues in Lessinia were to be his daily bread until the 1970s. In 1949 Marcello Mascherini invited Bogoni to work with him in the decoration of the transatlantic liner Conte Biancamano. Then after a 9-year break, he started working with Mascherini again in 1958 and they became close friends.

Between his teaching commitments and restoration work, he managed to cast some sculptures in plaster which he exhibited publicly for the first time since his appearance at the Agonali, at the "Fiftieth National Biennale of Art" at the Fine Arts Society in Verona from 20th May to 24th June, 1951, room n°5, together with Emilio Greco, Dino Paolini, and Germana Duina. Bogoni exhibited Bull and Chicken, two golden plaster sculptures.He took part in all the editions of the Verona Biennale, including the last one in 1967 and won the 55th edition in 1961 with Bovine. In 1953, two years after recovering from the nervous breakdown that had afflicted him after the war, he began the uphill struggle against ill health which, apart from an interval between 1965 and 1968, plagued him for the rest of his life.

1955 saw the unveiling of the War Memorial to the Fallen of San Michele Extra, Verona.

From 1955 to 1969, he took part in the "Triveneto Art Exhibition", in Padua. From 1955 to 1977 either upon invitation or as a competitor, he participated in the "International Biennale of Small Bronzes" in Padua, winning the first prize in 1973 with his sculpture Lotus 146. In 1962, with the painters Degani, Martinelli, and Bragantini and the sculptor Novello Finotti, he exhibited 14 pieces at the "First Open Air Exhibition" in the courtyard which was soon to house the Galleria Ferrari. Another important exhibition was the collective exhibition at the Galleria Ghelfi with Costantini, Ferrari, Finotti, Fontana and Maria Trevisani. In the same year 1962 he received his second important public commission: the War Memorial to the Fallen of Santa Lucia, Verona.

65 he created Shadows and The Great Wheels and exhibited them both competitively at the IX Rome Quadriennale (he would return for the 10th edition in 1972/73). The following year, on invitation, he exhibited three large sculptures at the XXXIII Venice International Biennale.In 1967 he was invited to the exhibition "Man and Space" at the "V International Science Fiction Film Festival" in Trieste.In November 1968 he spent one month in the USA. On his return he had to be admitted to hospital with a bladder tumour, an illness that continued over several years. In 1968 he took up graphic work.

In 1969 he had his first important one-man show at the Galleria dello Scudo in Verona. He would return again with Women in 1978.In 1970 Virgilio Boccardi made a documentary film about his work that was transmitted by RAI, (the Italian State Television Broadcasting Company).

In 1970 he taught sculpture at the "International Sommerakademie Fur Bildende Kunst" in Saltzburg, Austria. In the same year he held courses in sculpture in Belgium at the Academies of Art of Lieges, Brussels, Anvers, Verviers and Hasselt.
In 1978 he took part in the "International Sculpture Exhibition at Ca' Zenobia of Sommacampagna", in Verona, with two large Women (he would also participate in the 1984 and 1989 editions). In 1982 he executed the large sculpture Macro-Microcosmos for the 50th Anniversary of Glaxo in Italy.In 1985 he was invited to the Italian Exhibition of Contemporary Graphic Art (Disegno e Grafica Contemporanea Italiana) in Tokyo. In the 1970s and 1980s he did not travel but instead produced new sculptures: Lotus in 1972/73, Women in 1976 and a mounted model for a Basilica Door presented to Pope John Paul II in 1980. He created Metamorphosis in the same year, Helianthus in 1982-83 and Mutations in 1985-89.

Working right up until the last, he produced the large sculpture Fruit-Object-Sculpture, in 1990.
Despite all the difficulties he encountered, Bogoni always continued to work intensively: he exhibited at some 200 collective and one-man exhibitions, overcoming suffering through the sheer force of his will power.

"... Since I was a boy sculpture and drawing have always been a "primary" existential condition. To me they were indispensable, essential and irrepressible. It has always been my way of communicating with men and with nature. [...] To be an artist means plumbing the depths, where there are no easy solutions and the creative process is often racked with despair: where nothing is completely achieved or ever solved. And so new problems arise, new explorations begin, and new hopes, in art's wearisome journey towards utopia..." 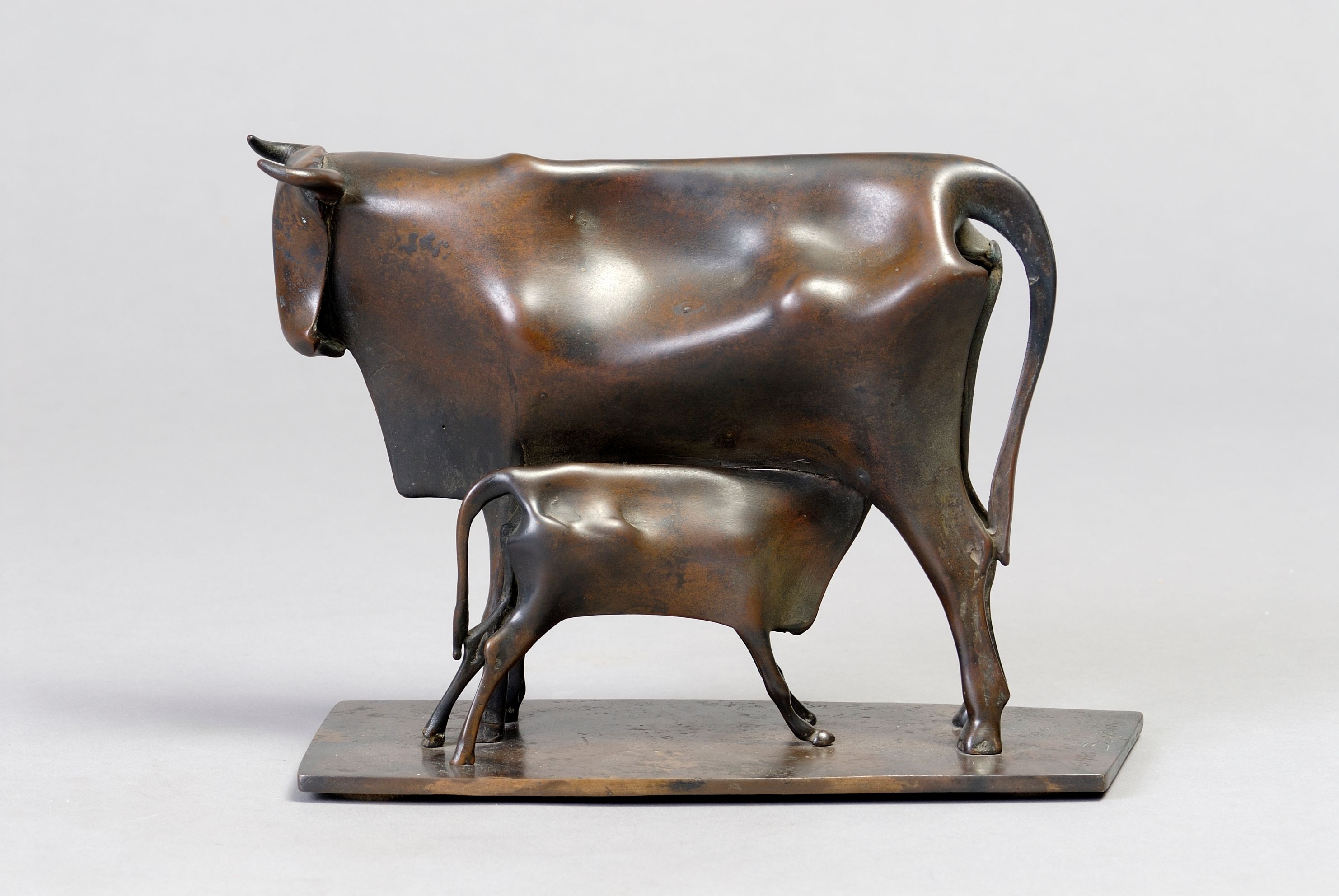